Red Enchiladas: The Best Way To Destroy Your Kitchen

You’ve probably seen dried red chiles. Walmart here sells them by the pound out of a big bin in the produce section. They look like this:

If you’ve ever wondered what to do with them, today is your lucky day. We’re going to make enchiladas. We’ll probably also make a fine mess in your kitchen. It’s gonna be totally worth it.

Some people have recipes for chiles where you use combinations of different chiles to create a sauce. Living this close to New Mexico we have access to some spectacular chile so I always go all red Hatch chile. Don’t let me stop your from experimenting but there’s something about New Mexico red chile that is indescribable. It’s not just the heat, but the earthy richness and the floral scent. So…yeah. Let’s do this.

I used about a dozen individual chiles. Give them a good rinse first because it’s not unusual for them to be a little dusty from the field. I cut the stems off mine, dumped most of the seeds out (a few seeds in your food is ok, it gives your dish a little life they say) and chopped them in to a few pieces. I like to toast them in a dry skillet for a bit, until they just start to get fragrant, after I rinse them. You can skip if you want but you’ll miss out on the really deep, complex flavor of red chile. Once toasted dump them, along with a roughly chopped yellow onion, a couple of cloves of garlic, a tablespoon of oregano and a tablespoon of cumin (easy on the cumin if you’re not sure) in to six cups of water and bring it up to boil. Once it hits a full rolling boil, turn the heat down to a simmer and put the lid on the pot for about half an hour. You want everything to get good and soft. While everything is boiling preheat your oven to 350.

Once everything is softened up, you’ll scoop the solids (chiles and all) into a blender and add just enough of the liquid to it to make sure in blends. You’ll probably have to do this in batches. Blend until you have a thick liquid. Pour the blended chile into a sieve over a second pot and work the chile pulp around until you’ve got a smooth, deep red liquid. Again, you’ll probably have to do this in batches, adding the chile and onion solids to the blender, adding the water they were boiled in, blending and sieving until you’ve got it all done. What you should wind up with are these: 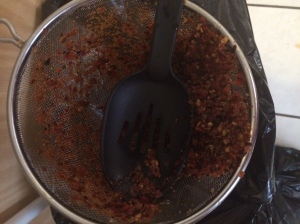 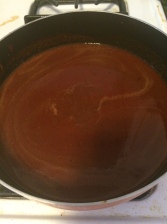 Thats the skins and seeds of my chiles on the left, hovering above my trash can and the resulting sauce on the right. You’ve just made red chile sauce. You can stop here if you want.

Now is the REALLY messy part. You’re going to want to set up a little assembly line here with corn tortillas, a pan to fry them in, your sauce, your filling, and the pan you’ll bake them in. Put about two fingers of vegetable oil in a skillet. This is the trickiest part. You’re going to need to fry a corn tortilla (DO NOT USE A FLOUR TORTILLA FOR THIS). Getting the temp right is hard. If it’s too low, the tortilla soaks up all the oil, gets soggy and will fall apart. Too hot and you’ll smoke up your kitchen or fry the tortilla solid. Ideally you want the oil just a little under the smoke point so that it only takes a few seconds on each side to fry your tortilla.

Take a corn tortilla out of the package, dunk it in the sauce (the sauce doesn’t need to be heated for this), enough to coat both sides. There’s two schools of thought about the order. Some people fry first, then sauce. I’ve always heard sauce first, then fry because it cooks the chile into the tortilla. I’m starting to get doubtful about this. I think you season your oil more than anything else. I’m going to experiment with frying first next time. Buy more tortillas than you need, you’re going to lose a bunch. Just solemnly nod at these lost tortillas and move on. They got ruined in service to something delicious. 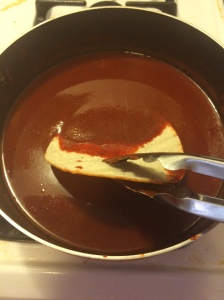 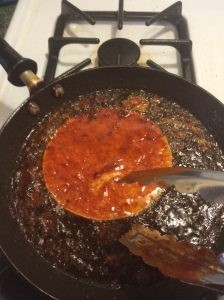 Then, take your sauced up tortilla and fry it in the oil, flipping once and removing it. You want the tortilla to form bubbles and puff up a little on each side. Once both sides are fried, move it to you pan. Dump some white cheese in that dude and roll it up, placing it seam side down. Your hands are going to be covered in red chile. It stains easily and doesn’t wash out so much as gets bleached out by the sun, so be careful with your clothes. You’re kitchen is going to be several shades of New Mexico red and grease splattered. This is part of the process. Enjoy it, because it pays richly. 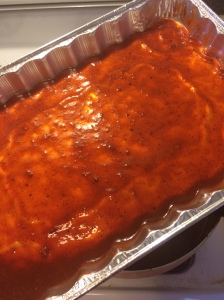 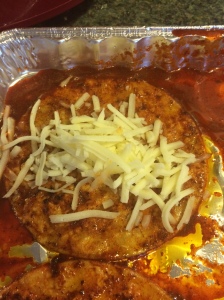 I’ve sauced up the bottom of the pan a little. This is optional and doesn’t make much difference I don’t think.  White cheese vs. yellow cheese is kind of a personal preference. I’m ride or die for white cheese, personally. I usually go with either muenster (a local favorite) or a soft Mexican cheese like queso blanco. You’ve got a lot of control over fillings. I usually stick to either cheese or ground beef. If you want to go ground beef, fry up some lean ground beef, add just enough red sauce to make it bind and shovel in queso blanco until you get a thick paste. Once you’ve got all your enchiladas rolled and laid down all Kentucky, pour the remaining sauce over the top and kinda half heartedly move it around to coat everything with a spoon. You can top the enchiladas with more shredded cheese, or a crumbly white cheese like queso fresco (sorta like a milder feta). Queso fresco and queso blanco don’t melt, but they get more delicious in the heat. Pop your enchiladas in the oven for 20-30 minutes, until everything is slightly browned on the top and bubbling around the edges. 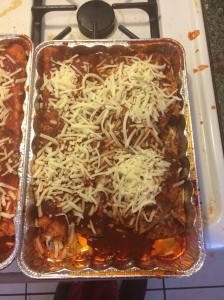 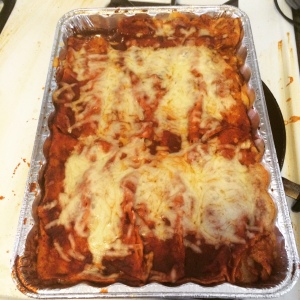 Before and after the oven.

Enchiladas are great for lots of things. Especially turning your entire kitchen red. They’re a traditional lenten food when filled with cheese and a hearty dinner when filled with meat. If you topped yours with queso fresco a little drizzle of table cream across the top when you plate them is going to make you want to lick your plate like some hungry cartoon bear. If you topped them with shredded cheese why not go all the way into decadence and top with a fried egg? You can serve them with rice and beans. Or scrambled eggs. Another great thing to serve with enchiladas is a steak. Something about the marbled, salty steak and the rich, deep flavor of chile go together so well that enchiladas and steak will replace thanksgiving dinner as you go-to fantasy meal. Cut off a piece of steak, spear a chunk of enchilada and drive them into your face.You’re not eating like a king, because they eat boring stuff. You’re eating like someone who scoffs at kings and rides raging stallions across the desert. You’re eating like someone who knows that sometimes to have something really good, you’ve got to really mess up your kitchen.

A teen on the Navajo Reservation (one of the most drop dead gorgeous places on earth) has invented an oven that runs off the one thing New Mexico has a TON of: the sun. Meanwhile, the wildfire sweeping the reservation is mostly contained for now.

Wildfires are a huge problem every summer out here in the west. This week leading up to Independence Day is always a good time to go over some basic fire prevention tips.

On that note, a little trivia; only one person in the history of the U.S. has ever been successfully prosecuted by the Feds for starting a wildfire. His name: Johnny Cash.

Finally, something near and dear to me: regional burrito styles. Of course, the Juarense/El Paso style burrito is my favorite. It’s also allegedly the original burrito from which all other burritos sprung.

What I’m Listening To

This week I’m listening to Western FM, which is an internet radio station started up by Rodney Hayden as a home of sorts for his great podcast. It focuses on cowboy music and poetry without ever getting too cute or faux-folksy (fauxlksy?)  What it really sounds like is riding shotgun in my Dad’s truck. Who doesn’t like that? The iPhone app is free, although it hasn’t “officially” launched yet. 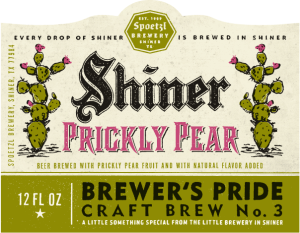 I stashed away a couple of  these from the last Shiner Family Reunion 12 pack I bought. The fruit of the prickly pear, a tuna in Spanish, has a sweet, medicinal taste, almost like cough syrup. It’s brewed in lager style beer that is corn sweet (like High Life or any other American beer made with corn) but not overbearingly so. Surprisingly, it works by balancing out all the sweet syrupy flavors with some hoppiness. I thought it would be a train wreck or an amusing novelty at best but I actually enjoyed drinking this more than, say…Ruby Redbird, which is made with Grapefruit. I’m biased towards liking this because I’m a fan of all things prickly pear, but if you can find one of these, it’s worth trying.

The sexism in bro country is a sword that cuts both ways. To continue the martial metaphor, yet another person takes up arms against it. For what it’s worth, I think the demographic it panders to has a pretty short attention span and oughta tire of it pretty soon. Whether I’m right, or if something worse takes it’s place remains to be seen.

Chipotle, a fast food place I will never, ever eat at because I can get better Mexican food cheaper pretty much anywhere where I live, has asked writers to contribute pieces to put on it’s packaging. Oddly enough, none are Latino. To be fair, most of the passages about food I’ve read by Latino authors are written so well, they’d over shadow anything a fast food place could throw together. (Plus, I think they know better than to ask Dagoberto Gilb what he thinks of their burritos.)

Finally, a happy piece about eating enchiladas in El Paso. L&J Cafe remains one of my favorite places to eat in El Paso.

What I’m Drinking This Week

Shiner White Wing. It’s a White Beer. Orange peel, coriander, the whole bit. I drank one with some barbecue a couple of nights ago. Tangy barbecue sauce + smoky sausage + sweet beer. It was pretty good. I don’t know what else to tell you. It’s hot out and white beers are refreshing in the summer.